Monday, 4.11.2013
We have squeezed out (agreed on) 15 minutes of additional sleep from Agnese. The news arrive that a Russian eclipse observer has outpaced all. He had gone 50km in the direction of Sudan and seen the full eclipse phase. We are a little bit envious. Many enthusiasts have arrived for the solar eclipse. We meet a traditionally obese American lady from Dakota. A meter thick layer of snow has fallen in Dakota. Here in Lodwar though, the temperature is 35 degrees Celsium.

After breakfast the first activity is restocking of food. We are looking for a shopping center with a sweet name of Kilimanjaro supermarket. Moving through the bumpy streets of Lodwar we find a humble one-storey building with this vibrant title. Having bought the products we head out. In the streets of Lodwar one can see both modern people dressed in jeans and ones dressed in the traditional tribal costumes. Colorful ethnic palette.

Past the window a semi-desert with few trees is sliding. It seems a person can not live here. But suddenly, in this abstract environment appears a figure, dressed in a cloak, thin legs with a stick and seat under his arm, going somewhere in a direction known only by him. The existence of humans is shown by goat herds. Goats are the main means of living for the people here. They give milk, blood and sometimes meat. How many goats are needed for a family to survive, remains a mystery. The number of goats is a measure of a family’s wealth. Ilgonis reads pieces from the Kulik’s books on Kenya. How to control a donkey. To stop the donkey it should be pulled by the tail, to accelerate should be hit under the tail with prickles. But what are the camels doing here? I did not see that anyone using them. Maybe they are wild?

The people living in this desert earn some money by gathering stones for building and burning charcoal for grill and selling them to city dwellers. For the most part, these desert people live in small huts of branches. In places here called cities, probably the government, builds more serious houses with tin roofs. Will these desert people feel good in those?
One stretch of road is considered to be dangerous. So a guard with a machine gun joins our company for 2000 shillings again.

Our driver has become quite energetic. The car runs jumping on the scary road potholes. Once in the end, we see our suitcases hanging in twines. A little more and they would have been lost. We have come to the accommodation unusually early. Marich pass field studies centre. We have decided for comfort and are renting double rooms. Since there is plenty of time until the darkness we are going on an excursion. We are accompanied by great horde of children and are giving them souvenirs – pencils. The local village. House size around 6 square meters. Arrangement is poor, without a chimney. Only the small children are sleeping with their parents. Big kids get their own house built. We are talking about the local weddings, beer from sausage tree fruits, poligyny (several wives).

Past our accommodation a fast river is flowing. During the day we noticed women rinsing something in the river. This is gold apparently. We try out swimming in the river. The kids are very pleased that such a stout uncle as me goes swimming. River is shallow and the water is rapid. A very refreshing feeling. A beautiful sunset on the river. Dinner and then off to sleep in our beds. 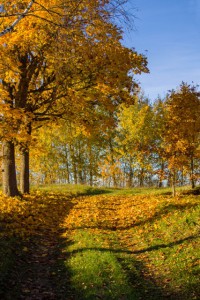 Latvian Autumn this year is particularly colorful. Autumn has dyed the trees, there are ​​a lot of explicitly sunny days and then also blue sky, makes up a nice range of colors. Latvia is nice with the fact, that here there are four distinctive seasons. Every season is special and can be truly enjoyed.

But there in the distant Kenya? Ilgonis recommended to thumb through Hemingway’s “Green hills of Africa”. I did as he said. The old boy Ernest speaks there only about beasts, shooting them and drinking whiskey. He does not tell anything in particular on the nature or the solar eclipse. Well maybe about walking through the bushes and hills to find the beasts to shoot. Walking can be expected also for us. Also the book stimulated an idea that a small bottle should be taken for medical purposes.

Much larger impression is left by a film of 1985 – “Out of Africa”, which is taken by references of Karen Blixen. Karen Blixen was fascinated by the vivid African colors and charming landscapes. It think the film might show the locations where we will go as well. So, I have a positive mood and a desire to make good pictures of the African landscapes.

I thumbed through a book Kenyan Safari by a Russian author Sergei Kuiskis, issued in 1983. Kuiskis who lived in Kenya for 6 years, provides interesting information about this country and people. He claims that the Swahili word – safari – means any kind of a trip. I thought it represents only hunting. Here’s what an obscurant I’ve been. So we will have a real safari. The book tells also about the Kenyan people. We will probably meet Maasai people on our way. It is just one of the so-called nilotic (Nile population) nationalities. They are said to be proud, tall, wearing spears and standing on one foot. At that time they did not like to be photographed. Maybe something has changed nowadays. Of course, since 1985 a lot might have changed.

Events in the Nairobi supermarket raised concerns about the safety in this country. But then I remembered the saying that a bomb doesn’t hit the same pit twice. Pondering further, I realized that such a terrorist act could probably take place also in London and New York, anywhere really. Looking from the point of view of global terrorism, we are going there in a safe time. Only the small bandits left then. I am concerned about my cork hat, colonial style, won’t the locals misinterpret.

About the comfort. The last time I slept in a tent was some 20 years ago. Therefore, I can call this safari for myself “A return to the youth”. We also have bought 2.5 cm thick mats.

It will be fine, interesting and joyful.
Nzuri safari marafiki.